I’d heard of the band Nirvana and knew who Kurt Cobain was, even before Dan Bern sang about Cobain and before I heard Dan sing Pennyroyal Tea. But I didn’t care. I still don’t necessarily like Nirvana’s music, but one song brings back a not-so-distant memory.

A few summers ago my kids and I visited friends in Lake Tahoe. It was my first time there and driving from Oakland to Tahoe was more experience than I’d expected. I was content to hang out at our friend’s home and drive around the lake a bit. 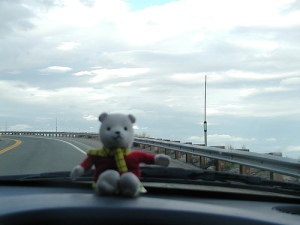 One day the hosts decided we’d all visit Virginia City and my car was necessary to carry passengers there. I was nervous, but figured it would be good for me – to drive though the mountains once again before I had to drive back to San Francisco later that week. The kids were allowed to choose the cars they wanted to ride in. The two girls (my daughter and her friend) chose to ride in the van with the experienced mountain driver leaving me to ferry the boys to Virginia City. (What did they think? If I got too scared to drive the boys would push the car?)

They were all excited – after all, the airport had upgraded me to a bright blue PT Cruiser and it was a novelty car at the time. “The boys” included David and his friend – both 16, Artie – 15 and my son – 11. We started out and as long as I didn’t look off the side of the road I was okay. The one thing I soon became aware of was the odor in the car. Three teenage and one preteen boy in a closed-up car in Nevada summertime made for a nose scrinching aroma.

To take my mind off the smell and mountain roads, I turned on the radio, but David handed me a CD. Artie, who was in the front seat, slid it into the CD player and as we sailed over the Nevada mountain roads the perfect song came over the speakers: Smells like Teen Spirit. Not only did I forget where I was, I let the boys roll down the windows and we played the song loudly several times. No fear and no smell…

Yeah, so the song is not about stinky boys, but I always think of that car ride when I hear it.