Where I first heard about Donovan is a mystery. It could have been at Cindy‘s – her parents were the closest to hippies that I knew – Cindy and her mom were vegetarians and Buddhist and they named their house Walden Oaks. Wherever I heard of Donovan, the idea of him caught my fancy. I bought myself his Essence to Essence album and played it in my attic bedroom, reading the lyrics as I listened to the songs.

I liked most of them, and different ones bring back different memories. Here’s one about the first track: Operating Manual for Spaceship Earth. 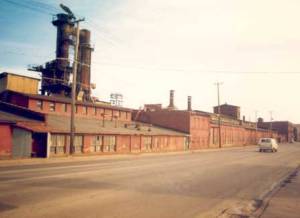 When a friend and I decided it was time Woodruff and Edwards, one of the local factories in town, stopped polluting the air and river, we made picket signs with some of the words from this song (which we were also going to shout to passersby):

We tried to talk our other friends into joining us on our protest – we had signs made and even a chant planned, but no one was interested (not even Cindy). We chose a day that we’d be off school and were ready to do our bit for a better world.

My friend decided, the afternoon before our scheduled protest, to call the factory to tell them they’d better fix their factory or we were going to come down the next day and picket in front of it. That they needed special anti-pollution caps on their smokestacks to stop their smoke from causing air pollution. She also said she suspected they dumped their waste into the Fox River.

She called me that evening and said our picket was off. The factory representative she spoke to told her that if we came down and picketed that the factory might close down because they couldn’t afford to put the special caps on the smokestacks. Then the workers would be out of jobs. Did she want that on her conscious? She didn’t and canceled our protest.

But I still liked that song, and would sing it when I passed the factory – or any factory for that matter. It wasn’t until last year that I found out that the song was named after a book by R. Buckminster Fuller.

Some hippie I made.