If you know me, you know that I am usually an avid sign reader and rule follower. I never park where I’m not supposed to park. If a sign says no trespassing — I don’t trespass — willingly, although when Dean is in the lead I usually reluctantly follow even if it goes against the rules (another subject for a blog post).

That said, I have been known to drive into and park/stand in the “buses only” part of the driveway leading to the kids’ school. At first I wouldn’t, because the signs clearly state “Buses only”, but because after school one can count dozens of vehicles that park and drive along that driveway, I decided that my one small car would not make a difference. And wasn’t it safer for the kids if they didn’t have to walk across an SUV filled driveway? So I began dropping Andrew off at wrestling and picking him up via the buses only area. All was fine until one day when Whitman’s assigned police officer was on his way out the front doors of the school. He looked at me, shook his head, smiled (not in a friendly way) and ambled up to my car. I rolled the window down and he asked me what I was doing. I said I was dropping my son off. He asked if I knew that cars were not allowed in the area. I said something about it being after school and I thought it was OK then (I should have mentioned the fact that usually there were dozens of cars doing the same thing after school, but didn’t). He said that the sign didn’t give specific hours, so it meant cars were never allowed within the buses only driveway. He then made me turn around and drive out the entrance.

That was my second interaction with the police officer at school. The first time I was dropping the kids off in the morning and turned on my blinker to move into the left lane in order to make the left turn lane (not into the parking lot) that would take me out of the lot. Office Aubrey motioned me over to the curb and chastised me for my action. I was too stunned by this to explain that I was actually going out the correct exit. He didn’t leave me room to defend myself anyway.

The other day my husband drove me to pick up our daughter at school after her driving lesson. He drove into the buses only driveway, against my protests that he was going to get in trouble from the school policeman. He said, look around — there were cars parked and standing everywhere along the “allegedly no cars allowed” driveway. Officer Aubrey was nowhere to be seen, although his squad car was right next to our car.

So I’m annoyed about that. The man needs to be consistent. If he picks on a lone woman in a Camry, shouldn’t he be out there telling the men and women driving their SUVs and minivans that they are not allowed to park or drive in the sign-posted buses only driveway? I think it’s a power thing. He can intimidate me but not a crowd of parents. It worries me that he might be picking on the shy high school students rather than dealing with the more aggressive students. And If the Rate my Teachers website can be trusted, here’s an example of his poor judgment, this time directed at a student.

You can see him “in action” in the following YouTube video of this “Senior Prank”. He made a judgment call – “I’m not going after [the modified streakers]. It’s senior prank.” Just like he makes judgment calls about carpool lines – I’m not picking on anyone when there is a crowd. I’m just intimidating the loners.

The topic of my son and his friends’ conversation to and from a recent rugby match ranged from nutrition to genetics to ancient history. No swearing nor a fart joke was heard. All I can say is only in Bethesda…

As I’ve mentioned, I wasn’t really into a variety of popular music in high school, so when our Junior class chose the theme, Knights in White Satin for Homecoming I was clueless. And I don’t know why such and old song had been chosen. [Ahh, wikipedia says it was re-released in 1972 – that’s why.]

Although I cannot find a photo of the float, I imagine it had a football player dressed as a knight all in white, stomping the opponents. I still don’t know much about homecoming parades. They don’t have them here in Bethesda. 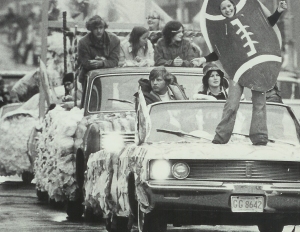 So, my memory of this Moody Blues song is of being cold, riding in the back of a pickup truck tossing candy to kids along the way. That’s me, in the pick-up truck. I’m the one wearing a black cap. You can see only my face.