Dear one and all,

Please don’t think I forgot your anniversary ((Mom and Dad’s anniversary was September 4th so this was probably written shortly after that)). I tried looking for some cards that I had bought sometime ago, but just couldn’t find them, but will soon as I’m doing a bit of cleaning every day. This card will have to do. Hope you had a perfect day. Imagine you all went out to eat some place, and made a big thing of it.

Boy it was chilly this morning, down to 49°. I turned the heater on and then burned a bit of wood.

Sure miss that Dona ((After Grandpa Green died I spent several weeks with Grandma. We bonded more than ever that summer)). Haven’t anyone to plan meals for, although I did eat good last night, steak, salad and the whole bit. Dog wants in.

Miss her and so does Chubby ((Chubby was Grandma’s beagle mix)). Chubby wouldn’t eat a thing until Tuesday.

Must hurry this along so I can get it up to the mail box. Miss Dona there too ((Until reading this, I didn’t realize I was helpful to her)).

I’m O.K. miss Dad ((Grandpa died of complications from a leg amputation in July of 1973. He was a good man)), but things will get better, just have to keep an open mind and remember everything good about him.

Fished last evening, caught one small bass, one bluegill, and bullhead and a dog fish. Yes Dona, I took a hammer and killed the bullhead, this time I made sure it was dead ((there must have been an incident where one of us was stung by the bullhead’s stinger)).

I’m so glad that the kids are coming up for a week.

I’m going to Jim Lorentz’s wedding the 22nd. Reception at Lehman’s. He’s getting married and no job.

Dear Pat, El ((Most people called Dad Al, but his name was Elvin, so Grandma called him El for a joke)) and Dona and Kevin;

Nice to know you were thinking of me yesterday. It was rather lonesome hoping someone would have called, but no one did. The boys sent me cards, but a note in his ((I’m thinking this was Uncle Dick)), letting me know their dog had her puppies, six in all. He called me a couple of weeks ago, wishing me happy Mother’s Day as he thought the others would maybe call yesterday. He and the children are coming up over Memorial Day. maybe his neighbor’s two children would come along.

I sent Dona a package, did she ever get it? You didn’t mention it in your letter. The only thing Chris said about Vilma ((Vilma was an exchange student who decided not to stay with us after a couple weeks)) was that she was leaving that Saturday, also she was kinda  funny girl.

We  have had nothing but cold and rainy weather since Thursday of last week. A couple of days we had frost, like this morning.

Rained very hard this morning, and who should pay me a visit, but Slim ((Slim was a hermit who lived in the woods. He picked mushrooms that my grandparent’s ate. He was Swedish. Apparently he was also a drinker)). Asked him to use the garage door as I didn’t want mud on the rug, then he said he didn’t know I had rugs. Really he wasn’t drunk, because when I let him in, I asked, also I could tell. After he was here about 1 hour told him he’d have to leave as I had to get dressed and had things to do. He asked if I had any whisky to sell, said no, but would sell him two beers, he gave me $1.00 and I gave him no change. Twice he came over under the weather and I told him in no uncertain terms not to do it again.

Yes, Verna and Les were up, went out with them Saturday, enjoyed myself. They told me that Jack ((Jack was a friend of my parent’s. Chris, mentioned earlier is his daughter)) was up, I didn’t see him, so I didn’t’ get your kiss.

I’ve finished my bedroom, also the hall, put up plaid wallpaper, it made it lighter, looks nice. Have some paper left, and thought I’d use it in the bathroom, but here wasn’t enough. So if I ever get to Rice Lake I’ll buy some there. Should have thought of that when Chris and I were up there.

No garden for me, I will plant the tomatoes that are started in the garage. I’ll go down to Slim’s and help myself. Also maybe Jim Lorentz will share his.

Bye now, love too all. I’m fine, hope you are too.

Dad wasn’t a terrible student in 7th grade, although he seemed to be distracted a lot. It makes no sense that he dropped out after 9th grade. 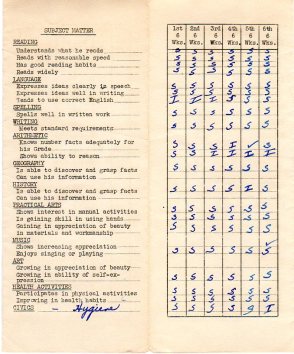 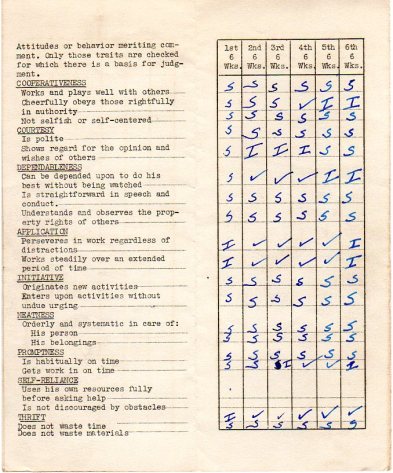