While enjoying a tasty pizza dinner together a few weeks ago, my son surprised Dean and me by telling us he was not going to be spending Christmas Day with us this year, but, instead, was traveling to Atlanta to spend Christmas with his friend, Alex and her family. I acted brave, but cried when I got home, and texted him that I was not ready for my kids to not be with me for Christmas.

I’ve spent the time in between thinking about him not being home on Christmas Day and realized it was okay — he would be there the day after and we could squeeze in a family Christmas on December 26 before Clare left on December 27. We often moved our personal Christmas celebration around when the kids were small because we usually traveled back to Elgin for the actual day.

Andrew and I had lunch earlier this week and he confided that he was a little nervous because he’d never not spent Christmas with us and we had our own traditions. He was going somewhere where they had their own traditions, ones he was not familiar with.

I thought about this and remembered that my first Christmas away from my family was in 1978. I was a year younger than Andrew is now and I was gone from early December through March. That year I did student teaching in London and left Elgin early to spend time with my English friend, Jeremy, and his family. I also recalled that I, too, was nervous — although I’d spent months with this family over the previous four years — because I was not familiar with their traditions. It was wonderful though. I was introduced to wine with Christmas dinner, Christmas cake, chocolate oranges and Christmas crackers. 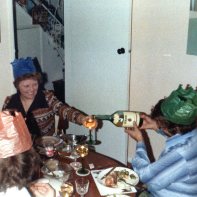 Jeremy with a christmas cracker toy and silly hat

While I never did attempt to make a Christmas cake, I did insist we have wine with Christmas dinner the year after I returned from England. I also always made sure to include a chocolate orange (and a real orange) in everyone’s Christmas stocking. Once Christmas crackers became readily available (and affordable) in the US I always buy a box Christmas crackers which we pop before the Christmas meal, wear the silly hats that come in the crackers, read the lame jokes and play with the included toys. 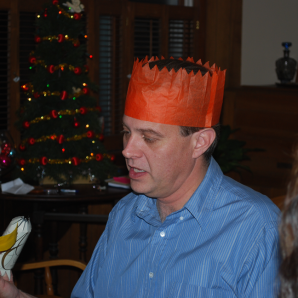 Kevin with a silly hat 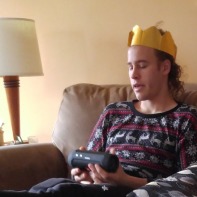 Dean with a silly hat 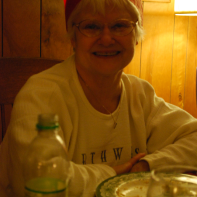 Mom with a silly hat

I sent Andrew a text telling him about that Christmas and that many of the unfamiliar traditions I experienced that year were such fun that I incorporated them into our family celebrations.

His reply made me cry a little again. He thanked me for telling him about my first Christmas away and then said he was bringing chocolate oranges and Christmas crackers for her family.