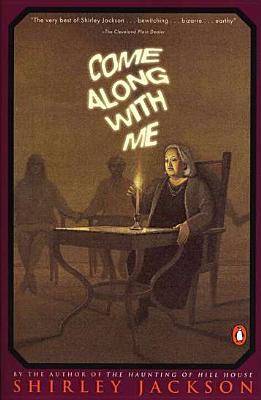 I, like most of the world, was introduced to Shirley Jackson through reading her short story, The Lottery, in high school. It wasn’t until years later when I picked up her books about raising her children that I realized what a wonderful writer she was. After reading Raising Demons and Life Among the Savages I moved on to We Have Always Lived in the Castle and fell madly in love.

Come Along with Me is the name of her incomplete novel which is about a woman who escapes from her past reinvents herself.

The rest of the book has something for everyone: Humor (Pajama Party and The Night we all had Grippe); Mystery (A Visit and The Bus); Suspense (The Little House); Drama (The Summer People and The Rock); and Non-fiction (Three Lectures: Experience and Fiction, Biography of a Story, and Notes for a Young Writer).

At some point, I must make time to read all her novels. Maybe after this Read-a-Shelf thing is over.

I posted this on Facebook after being “tagged” by at least 3 people to post a list of ten books that somehow influenced me. Mali suggested I post this on my blog. As I said on Facebook, I think the main connecting theme of my list is that I have vivid memories of reading each of them — and images in my mind of the characters, settings and plots. I can even feel the emotion I felt when reading each of the books.

1. Five Smooth Stones by Ann Fairbairn — this book opened my eyes to the civil rights movement. Many of the characters still live with me to this day.

2. In Cold Blood by Truman Capote — I read this in middle school. The images it evoked are still etched in my mind.

3. Dracula by Bram Stoker — the first non-young adult novel I ever read (in 7th grade). I adored stories about vampires and this was a classic.

4. I Capture the Castle by Dodie Smith (she also wrote 101 Dalmatians) — “I write this sitting in the kitchen sink” is one of my favorite opening lines.

5. The Chronicles of Narnia by C. S. Lewis (Yes I know this is 7 books, but I consider it one large book) — I loved these books which I read in my teens, although my teacher read The Lion, the Witch and the Wardrobe to us in 6th grade. I’ve re-read several of the books since my first reading and shared them with my students and children.

6. Billy Brown the Babysitter by Tamara Kitt — the first book I ever read on my own. I remember suddenly being able to read and just read it.

7. My Bookhouse Books edited by Olive Beaupre Miller — another set of books, but each one was extremely important to me. These books made me a reader. I learned so much about literature from this set. The very best gift my parents ever gave me was this anthology set of 12 books (which seems to be available for purchase again! I wonder if it has been updated for political correctness.)

8. The Beautiful Things that Heaven Bears by Dinaw Mengestu — I received this book to review for a website before it was published. I didn’t have high hopes since it was written by a — then — unknown author, but absolutely loved it. I rarely re-read books, but have read this one a few times. I wrote the first Amazon review about this book. The next day I got to meet Mr. Mengestu. When I told him my name so he could sign my copy he recognized it and thanked me for the review.

9. The Little Stranger by Sarah Waters — a well-written ghost story in which a house is a main character.

Before Erma Bombeck and Jean Kerr wrote about life as housewives and stay-at-home-mothers in the 1950’s, Shirley Jackson had already published her account.

You’ve probably read, or at least heard of Shirley Jackson, but you might not remember where or how. Think back to your high school English classes. Remember reading The Lottery? If that doesn’t ring a bell, perhaps you are a fan of horror films. If so, you might have seen the 1963 film, The Haunting or its mediocre 1999 remake, both based on her novel, The Haunting of Hill House.

While Ms Jackson is more widely known for her Gothic horror stories, she’s likely the creator of the humorous housewife/mother sub-genre of literature.

In Life Among the Savages, Jackson tells us about raising her three children, Laurie, Jannie and Sally. It’s told with humor and not a little self-deprecation. Ms Jackson was matter-of-fact about not being the perfect stereotypical 1950’s housewife:

Our house is old, and noisy, and full. When we moved into it we had two children and about five thousand books; I expect that when we finally overflow and move out again we will have perhaps twenty children and easily half a million books; we also own assorted beds and tables and chairs and rocking horses and lamps and doll dresses and ship models and paint brushes and literally thousands of socks. This is the way of life my husband and I have fallen into, inadvertently, as though we had fallen into a well and decided that since there was no way out we might as well stay there and set up a chair and a desk and a light of some kind; even though this is our way of life, and the only one we know, it is occasionally bewildering, and perhaps even inexplicable to the sort of person who does not have that swift, accurate conviction that he is going to step on a broken celluloid doll in the dark. I cannot think of a preferable way of life, except one without children and without books, going on soundlessly in an apartment hotel where they do the cleaning for you and send up your meals and all you have to do is lie on a couch and–as I say, I cannot think of a preferable way of life, but then I had to make a good many compromises.

Life Among the Savages begins when Ms Jackson, her husband Stanley and their two children live in New York and decide to move to Vermont, where Stanley (Hyman)has a job at a local college. It describes their house hunt in a small town in Vermont.

One nice thing was, there were lots and lots of houses available. We heard this from a lady named Mrs. Black, a motherly old body who lived in a nearby large town, but who knew, as she herself pointed out, every house and every family in the state. She took us to visit a house which she called the Bassington House, and which would have been perfect for us and our books and our children, if there had been any plumbing.

My husband shifted nervously in the snow, “You see,” he said, “that brings up the question of…well…money.”

Mrs. Black shrugged. “How much would plumbing cost?” she demanded. “You put in maybe twelve, fifteen hundred dollars, you got a real nice home.”

“Now look, if we had fifteen hundred dollars we could give an apartment superintendent–” my husband began, but I cut in quickly, you must remember, Mrs. Black, we want to rent.”

“Rent, did you?” said Mrs. Black, as though this proved at last that we were mere fly-by-nights, lookers at houses for the pleasure of it. “Well, if I was you folks, small children and all, well, I‘d buy.”

While Jackson’s other works are more widely acclaimed and on some “the best of” lists, Life Among the Savages is a well-told and funny slice of life tale. Some critics call it forgettable. I disagree and like reading about this side of a woman whose tales of darkness have fascinated me for years.

It seems to have been written before the darkness that ended up plaguing her took over. It’s readable and funny. While Jackson’s mental illness may have contributed to her genius and spawned some of the last century’s best horror tales, she was a good writer anyway and Life Among the Savages proves it.

One thing of which to be aware, however — this book didn’t age well. While I was able to laugh at many of the vignettes without really thinking, some made me chuckle with reservation. Remember this was written in the late 1940s and 1950’s. Back then people drank more. People smoked more. Even pregnant women smoked. And probably drank too, without thinking about how it was harming their unborn children. Shirley Jackson was a very heavy smoker and she wrote about smoking cigarettes a lot. While cooking; while reading; while waiting for labor pains to begin in her fourth pregnancy. In fact this book is, in some ways, a direct opposite of some of the mommy blogs I’ve been reading lately — yet similar in some ways. Current expectant moms wouldn’t think of writing about lighting a cigarette while pregnant, but they do write self-deprecating vignettes about their day-to-day life. I suppose the women who are writing the blogs about motherhood (the ones who do it well) are the current Erma Bombecks, Jean Kerrs, even Shirley Jacksons. The times have changed–technology, medicine, child-rearing; but maybe more has stayed the same.