We left Rock Island and headed to Batavia around 10:00 after a hearty breakfast at the American Bar and Grill. The countryside became less pretty as we headed east — still countryside, but flat. But it is always fun to be able to see for miles because of the flatness of the land.

As we neared Dekalb, Illinois, Clare said she’d like to see Northern Illinois University, where her dad and I went to college. The campus is prettier than I recall. We walked around the area of Altgeld Hall and the closer part of the Lagoon (which is much closer to the building) than I recall it being. The fallen grotesque has lost its head — I wonder where that went. Clare snapped some photos of a grazing baby bunny and some of Altgeld Hall.

We drove on to Batavia after our stop at NIU and were greeted warmly by Kevin and his menagerie (he has two dogs now — one belongs to his roomate though– and two cats). Ashley was there, and apparently so was Brandon, but he didn’t wake up until around 4 pm, having been awake until morning playing his video games.

We went out to a very nice restaurant on the river in Batavia with Kevin, Brandon, Ashley and her friend, Heather. We ordered too much food, as usual, but since most of it was pizza we brought it back to Kevin’s for breakfast food.

I took the girls to see a late showing of The Dark Knight. It was far too dark for me (perhaps because of the late hour, I couldn’t deal with so much violence) but the girls loved it.

We didn’t get to sleep until around 1:30 am, so we all slept in and had a lazy Sunday. Kevin bought food for grilling and Clare planned the next couple of days’ driving routes.

We have three more colleges to visit. Today we will simply drive — the first college is over 6 hours away — then visit the two near Cleveland tomorrow and on Wednesday morning visit the college north of Pittsburgh.

It is both interesting and a tad worrying that college admissions folks are visiting this blog. It is also understandable. We’d been told that admission counselors sometimes checked facebook and myspace pages when reviewing prospective student’s files, so why not blogs that mention or link to their colleges. I’m pleased that two of the admission counselors have left comments on the blog.

It is pouring down rain now, and thundering. Not the best weather in which to pack the car and drive. Maybe it will stop soon.

I remember my first visit to Northern Illinois University. I was an incoming Junior, transferring from a local community college. I still didn’t drive and was expected to go to orientation. My mom drove me the 45 miles to school for the orientation, I think she brought my grandmother along.  I don’t know what they did while I attended orientation, but afterwards we ate lunch at Kings Restaurant in Sycamore. That was the year the decomposed body of the girl was found on farmland in the area and the restaurant had a drawing of what she might have looked like. The restaurant had the drawing by the cash register. I remember not being able to eat much lunch, thinking about that dead girl.

I don’t remember much about the orientation, except we did a lot of walking.

NIU has a nice campus and is, or was, basically in the middle of a cornfield. There was nothing but fields of corn and farms for miles around, and there, rising high in the sky (compared to corn) was the Student Union, I think. I recall there was also a pond and once a year students would gather near the pond for a “smoke out” and openly smoke marijuana.

I remember winters at NIU. Walking from one building to another building were some of the coldest experiences I have ever had.  The cold wind would sweep across the flat land and nearly knock me down. 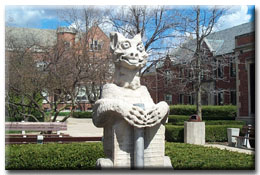 I never felt a real kinship with the place because I was not a resident. I lived at home and got rides with various folks, paying them gas money in exchange for a lift to school. After graduating, I rarely returned to campus. I went back a few times while my boyfriend was working on his Masters degree, once to see a play, I think — The Elephant Man. A few years ago we drove around campus to show our kids where we went to college.  I remember we took a photo of the grotesque in front of Altgeld hall. Clare liked that.

After moving away from the Midwest very few people I’d talk to knew of the school.

Today that’s changed. Today a gunman killed 6 students, including himself and wounded 15 others in a lecture hall at Northern Illinois University. Today, and for a while, people will have heard of the school that sat in the middle of a cornfield.