In 1990, back when I still read newspapers. Back before kids, I read an article about a new television series in the April 30 Washington Post. I trusted Tom Shales, the journalist who wrote the article because he’d never led me wrong when it came to entertainment. Maybe it was because he was born in Elgin, maybe we just had/have the same tastes in television.

I probably would have watched it anyway because it was the brainchild of mastermind David Lynch — a director whose works Dean and I liked. We’d seen a presentation of some of his very early works at a local (now long-gone) art theater, and we saw pretty much anything he’d done that far (except Dune).

Dean and I loved the first season of Twin Peaks. Our next door neighbors also loved it and we’d often watch episodes together, drinking damn fine, and hot, coffee and eating pie. We even had a Twin Peaks dress up party for the final episode. My friend Totty came as the Log Lady. I don’t remember who I dressed up as. Too bad that was before smartphones with cameras because we would have definitely taken photos.

Back then, I don’t think I knew anyone else who liked Twin Peaks. Certainly no one at school. There was no Internet on which to discuss each episode with strangers. (at least not in our house). We just liked it, talked about it among ourselves and when we did run into someone who’d seen the series we’d talk with them about it.

We bought the DVD set when it came out and Clare got into the show, so much that she took it to school, then Olympia (not far from the filming location) and shared it with friends.

On one trip to Olympia, we visited North Bend, Washington where parts of Twin Peaks was filmed and ate pie and drank coffee at the Double R and posed for photos in front of the Great Northern Hotel and it’s nearby iconic waterfall. 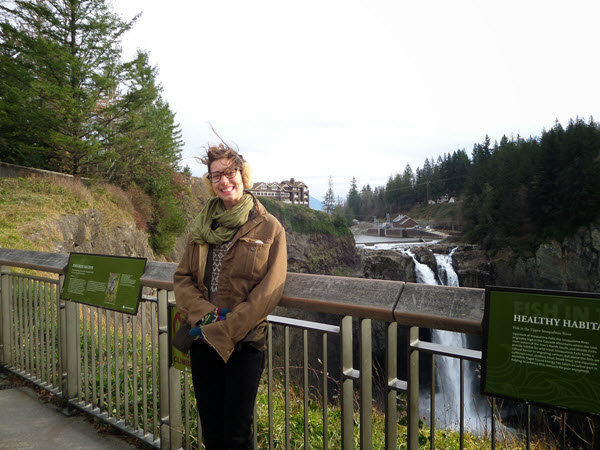 Needless to say, we (or rather I) followed with interest the rumors about the revival Twin Peaks series. Totty heard about the series and suggested we get together to watch the first episode. We were not able to watch it the night it aired, so we planned on watching two episodes the week after. Totty brought an apple pie she’d baked and I made some coffee. We settled down to watch the revival of what had been our favorite television series 25 years ago — and possibly still was our favorite.

Well… the owls are not what they seem. If someone had been secretly filming us our expressions would have gone from happy expectation to confusion to bewilderment to disappointment to sadness. As the credits rolled for the second episode, Totty remarked that it sure was not what she was expecting and said, “Where was the coffee? Where was the pie?”

Damn right — where were the coffee and pie? Where was the charm?

Dean and I watched episode 3 a couple nights ago and, after some strangely Eraserheadesque scenes, it got better. I am not giving up on the series, I am just going to go into the rest of the episodes with much less expectation.