My constant companion, RQ-209s, captured many [seemingly] important as well as unimportant audio moments in the 1970’s. Below are a few. The tape must have been damaged, because every so often the sound was erased. Perhaps it was too close to a magnet or maybe it is just age.

The first part of the tape was a TV weather broadcast. I didn’t know why I would record a weatherman talking, but then remembered that in junior high we had a visit from one of the weathermen on a local TV station. I recorded his mention of the visit. (Kimball Tigers)

Listen to an unknown weatherman from nineteen seventy-something.
[audio:weather_kimball_mention.mp3]

And here I am playing Silent Night [poorly] on my green electric organ.
[audio:organ_silent_night.mp3]

Here is a card game. I think my dad was losing and being nasty about it, but it is hard to understand in many spots. It’s neat hearing my Aunt Ginny and grandparents. I wonder if anyone knew they were being taped.
[audio:playing_cards.mp3]

I like this one – Kevin comes in from outside and I taunt him. I threaten him, but we end up laughing. I think he has another friend in the house too. The cat also has a word or two to say.
[audio:kevin_dona_playing.mp3]

This next sound bite is part of a call-in radio broadcast centering on the firing of Elgin’s police chief whose name was Hanson. I don’t remember it at all. The speaker seems to be the city manager. Mayor at the time was William Rauschenberger. My parents either strongly liked him or strongly didn’t like him. I think my mom must have taped this.
[audio:police_chief_hason_scandal.mp3]

Here’s a little bit from WLS, my preferred radio station at the time. I wish I had not ruined it at the end with the beep beep beep noises.
[audio:wls.mp3]

My cat, Cinder, was part Siamese. She howled like one. My first landlord thought I was hiding a baby in the apartment.

Finally, I don’t know whether this last sound bite is funny or depressing. I certainally sounded depressed at first – mostly because I knew this tape was not a very good birthday gift and was upset with myself that I didn’t make more of an effort to get him something. It ends ok, with my brother and me collaborating, but is hard to understand in many spots.
[audio:dad_birthday_tape.mp3] 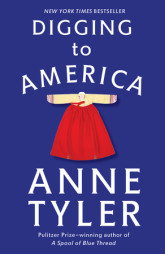 I don’t remember the title of the first book I read in which nothing happened, but I remember being surprised that 1) Nothing happened and 2) I enjoyed it. It may very well have been an Anne Tyler book.

In Anne Tyler’s latest book, Digging to America, nothing happens. Well, that’s not entirely true. What I mean is nothing but life happens. There is no mystery, no great climax, no real plot to speak of. And that’s ok. Anne Tyler’s gift is not necessarily plot heavy books, but books with intricate character studies.

I’ve been an Anne Tyler fan since I read Dinner at the Homesick Restaurant back in the 1980’s and have read 15 of her 17 novels. Although I didn’t realize it until today, all of Ms Tyler’s books are mostly character studies, and therefore it is the characters I mostly remember from her novels. I loved the way Ms Tyler wrote about quirky characters and I often joked that my in-laws would make great characters in an Anne Tyler novel.

Digging to America is about two very different families that meet at an airport while waiting to meet their adopted daughters from Korea. The story revolves around the two families through the next five years: their evolving friendship, occasional bitterness, a loss, a romance and not a little misunderstanding.

Brad and Bitsy Donaldson are well-meaning, politically correct suburbanites. Sami and Ziba Yazdan are Iranian-Americans, adapting to American culture, while occasionally shaking their heads at Americans’ behaviors. Each family has extended families whose characters are as colorful as anyone in real life.

The book alternates between the two families’ points of view, each chapter providing a different character to speak, so the reader gets to be “in the head” of several characters in the novel.

If you are looking for a book with an intricate plot, I’d pass this one by, but if you want a cozy book in which the characters are highly developed, give Digging to America a go.