Wrestling ended officially last weekend with the annual Wrestling banquet and honors ceremony for the team. For us it was the final banquet, and very bittersweet.

Wrestling is over for Andrew. He has no plans on wresting in college and, as far as I know, there are no wrestling “pick up” matches in which former wrestlers can participate if they get the urge to wrestle — unlike many other sports such as basketball, baseball and football.

I don’t have a lot of regrets, but one I do have is not being interested in Andrew’s sporting life earlier. I rarely went to any of his soccer or rugby matches or basketball games when he was young, and while I probably went to more wrestling events because they were inside, didn’t go to most of them up through middle school. I understood none of the rules of any of the sports he liked and was not interested enough to try to learn. I’ll never get those days back for a re-do.

Once he got into high school and was chosen the varsity wrestling team as a freshman, I began to take an interest. I volunteered to redesign and manage the team website and attended most of the meets and tournaments throughout his high school career. I learned the rules, screamed directions to the wrestlers with the best of them, and cursed out the referees poor calls like a pro. I developed an appreciation for all of the sensory assaults experiences one encounters at a wrestling tournament: the shrill whistles, loud buzzers and screaming fans; the scent of hundreds of sweating adolescent bodies mingled with the odor of bleach used to sanitize the mats; the backache from sitting for hours on hard, backless bleachers; the sight of constant movement on the gym floor under unforgiving gymnasium lighting; the taste of whatever was sold in the concession stands.

I am so proud of my son and what he accomplished these four years as a wrestler. I believe that much of what he’s become as a young man (a delightful, smart, charming, kind, thoughtful, strong young man) is due to his experience on the wrestling team. I wrote about his coach a few years ago — but it was even more than that. It was his team. His teammates. His opponents. It was the whole experience that helped shape him.

The facts that he took first place in the county and region and fourth place at States are admirable as is his inclusion on the local newspaper’s  “first” team, but even without these honors, I would have been proud of him. They’re just added value — icing on the cake.

Here’s to the end of wrestling — the end of an era for us. We’ve got a lot of memories and a whole lot of photos.

Here’s my favorite. He’s hugging his coach after his very last wrestling match of his high school career. He lost, but took 4th.

As much as I love the deeply fragrant smell of lilacs in the spring, I think I prefer the lighter, less heady smell of peonies.

Peonies smell like warm, late-spring afternoons on Heine Avenue where several plants grew on the south-facing side of the house. That smell is wafting through my dining room right now bringing me memories of my childhood at 240 Heine.

The smell foretold the end of the school year and the long, carefree warm months of summer just around the corner. Soon there’d be fireflies. Soon we’d be barefoot all day.

I only have one peony plant that produces flowers. Usually I only get two or maybe three flowers, but this year I got five — likely because the neighbor cut down a tree that was casting shade where the peonies grew. I hope to plant more of these, perhaps in front of something that we’ll plant for privacy instead of the weeds that grow there now. 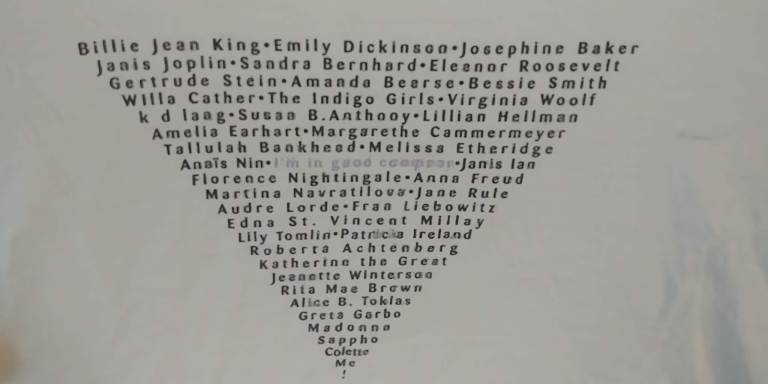 At least 28 years ago my friend Rosanne gave me a shirt that, while huge on me, I loved. I think I was supposed to wear it with leggings (which were “in” 28 years ago, along with big hair) or maybe she meant to wear it when I was pregnant.

The front of the shirt has dozens of women’s names on it in an inverted triangle, with I’m in good company in lilac in the middle of the names. The bottom of the triangle (the tip) reads “Me!”

The back of the shirt has an image of a man who resembles the Fallout Shelter guy fishing and the caption reads, “Good Catch!” which I assumed was the name of the company that made the shirt.

I wore the shirt with pride for many years, until it started getting ragged at the neckline and holes showed up in spots, then I wore it as a night shirt.

At some point I figured out that many, if not all, of the women named on the shirt fell somewhere in the LGBTQ+ community and I wondered if I was telling a lie by wearing it, or could even be accused of appropriation. Nevertheless, I still loved it and wore it with pride.

Sure enough, this shirt can still be bought at the Good Catch website and is called the Famous Lesbians Shirt.

I wonder if Rosanne realized that about the shirt. It doesn’t matter. I still love it, even though it is even too ragged to be worn as a nightshirt.